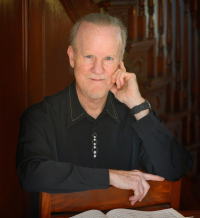 Lee Bracegirdle earned his Bachelor and Master degrees at the Juilliard School,
studied conducting at the Mozarteum in Salzburg, Austria with Michael Gielen,
and was awarded an Honorary Diploma by the Kodaly Academy and Institute in Chicago.
He has held positions as principal horn in orchestras in Germany, America and Australia,
and has had an extensive career as an instrumentalist, composer, conductor and arranger.
As a composer he is represented by The Australian Music Centre
His Variations for Orchestra, Ammerseelieder, Threnos, Euphonium Concerto,
Legends of the Old Castle and Violin Concerto are published by C.F. Peters.

Variations for Orchestra (2000)
received its world premiere in 2002 by the Sydney Symphony Orchestra conducted by
Richard Gill in the Concert Hall of the Sydney Opera House. CD recordings of this performance
are available through The Australian Music Centre

Radio station 2-MBS FM published an article/interview with Lee
in their March, 2002 issue of "Fine Music" magazine.
Read Blow me down, it's a serialist! on the
reviews / press reports page.

In their reviews of the world premiere, Sydney's newspapers acclaimed:
"Bracegirdle's Variations exhibit ingenious, multi-coloured scoring,
with never a dull moment. This is clever stuff!"

Orchestras can hire score and parts from the publisher C.F. Peters

Ammerseelieder (Songs of Lake Ammer) (2005)
were premiered by the S.S.O. in 2005 as part of their
bi-annual "Festival of Contemporary Music". Commissioned by Symphony Services International, this
work is a cycle of 5 songs for low voice and orchestra based on Bracegirdle's own original texts.
The texts were inspired by scenes and experiences near Lake Ammer in Bavaria.
The world premiere was directed by Dutch conductor Reinbert de Leeuw,
and the soloist was the French-Australian baritone Didier Frederic.

Threnos (2007) for Solo-Horn, Winds and Percussion
was premiered and recorded in 2007 by William Purvis, horn soloist, with the
American Wind Symphony Orchestra under the direction of Robert Boudreau.

Concerto for Euphonium and Orchestra (2007)
Lee's SSO colleague, Scott Kinmont (Associate Principal Trombone) suggested in 2003
that he compose a solo work for Euphonium, the instrument that he plays
with as much passion and flair as the trombone.
For years Scott had bemoaned the fact that this instrument, most often employed in the
brass band medium, had been neglected in the genre of the orchestra.
(see: article from Sydney's Daily Telegraph: "Rare Works Please")
The concerto was premiered in 2008 with Scott as soloist,
accompanied by the SSO, conducted by Matthew Coorey
as part of the orchestra's 2008 "Meet the Music" concert series.

His compositions for ballet, Eat Pianist and Prometheus and Pandora
have been choreographed by Adrian Dimitrievitch
for the Australian Chamber Ballet, where Lee is Musical Director and Composer-in-Residence.
Eat Pianist is based on a comedy/horror/suspense/cabaret story developed by Mr. Dimitrievitch.
Mr. Bracegirdle created both the synopsis and music for Prometheus and Pandora,
based on a contemporary interpretation of the classic Greek mythology.

Legends of the Old Castle (2012)
for solo harp, winds and percussion was commissioned by
the American Wind Symphony Orchestra..

During his 2012 residency in the Brahmshaus in Baden-Baden
Lee was inspired by the ruins of Hohenbaden Castle and its ancient legends,
and by the sounds of the aeolian harp, or "wind-harp" installed in the Knights' Hall of the castle.

Louise Johnson, accompanied by the S.S.O. performed
the premiere in July, 2014 conducted by Simone Young.

The harpist renowned for breaking rules and boundaries when it comes to this instrument
performed the European premiere of "Legends" in the place where the inspiration for the work arose.
With the original "Old Castle" perched high above the city and within plain sight of the concert hall,
audiences in Baden-Baden were transported back centuries to the
world of medieval sagas by Mr Stickney's dramatic interpretation.
- contemporary music returns to its spiritual roots,
accompanied by the Baden-Baden Philharmonic, conducted by Thomas Rösner

Concerto for Violin and Orchestra (2012),
composed at the request of Sydney Symphony Orchestra's
former concertmaster Michael Dauth was premiered in May, 2015.
Mr. Dauth was accompanied by the Sydney Youth Orchestra
under the direction of chief conductor Alexander Briger.
The concerts took place in the Verbrugghen Hall of the Sydney Conservatorium of Music
and in the Parramatta Riverside Theatre.

Shoalhaven-Lieder (2017)
a song-cycle for high voice and orchestra
based on philosophic poetry on the subjects of life, love and death.
The cycle is comprised of 8 songs using texts by
Clive James, Heinrich Heine, Adolf Friedrich von Schack, James Agee and Charles Waterstreet -
Lee began sketches while in-residence at Bundanon and continued work
during his 2014 residency in the Brahmshaus, Baden-Baden.
Completed: 2017 in Sydney

Triptych for saxophone and orchestra
Prominent Sydney-based saxophonist Christina Leonard has requested from Lee
a solo work for Saxophone and Orchestra.
Structured in the form of ancient 3-part paintings known as "triptychs",
often found on church altars.
These paintings depict a story-line flowing from left to right,
where the outer wings are shorter 'introduction and finale' sections
placed astride a larger, more developed middle section.
The soloist is required to play both alto and soprano saxophones.

Clarinet Concerto (projected completion: 2022)
is being composed at the request of and dedicated to
3 prominent clarinetists on the interational stage:
Francesco Celata, Lee's long-time colleague at the Sydney Symphony Orchestra;
John Yeh, Chicago Symphony 1st clarinet (and Lee's old buddy from Juilliard);
and Dimitri Ashkenazy, soloist based in Switzerland;

This will be a 3-movement work, using
full orchestral accompaniment.

The Bundanon Trust, a foundation created in 1998 through the bequest of the Australian
artist Arthur Boyd, selected Lee for their "Artists-in-Residence" program in 2003 and 2013.
In the secluded, inspirational environment of this historic property on the South Coast of New South Wales
he joined other performing and graphic artists in an intensive creative atmosphere
in order to bring to life new works. Compositions that emerged through these residencies
have been Euphonium Concerto, Resonance and Shoalhavenlieder

residencies in the "Brahmshaus", Baden-Baden

During Spring of 2012 and 2014 Lee was composer-in-residence at "the Brahmshaus" in Baden-Baden, Germany
The Brahms Society, formed in 1966 to preserve the only surviving house in Germany
where Johannes Brahms had lived, selects composers from around the world
to take part in its residency program. This historic building, that Brahms described as
"the beautiful house on the hill" was his summer residence from 1864-1875.
In providing this service to composers, the society's aim is to
"continue Brahms' tradition of aiding of young artists in their creative development"

His works that were conceived and/or developed here are
Legends of the Old Castle and Shoalhaven-Lieder.